skip to main | skip to sidebar
CLICK ON AN ALBUM TO LISTEN OR BUY:

You've Got Everything Now (Take 2)


*Update*
This is the multi-layer version of the second song that replaced the original single-voice track. It was also my first attempt at adding rhythm to a cover. Complete with all the doots and aaaahhhs of a live a cappella song, it could be easily recreated and I would absolutely love to hear some barbershop quartet type group give it a whirl. After a few more songs with this traditional singing style, I quickly realized I was going to have to expand and make things more interesting before I doo-ta-doo'd everyone to death. I often wonder what I might have come up for my rendition if it had taken place later on in the project.

FUN FACT: Each vocal is on a separate layer in ProTools so that I can adjust volume/panning, etc. I used to label them according to how they sounded, for example Low Doots, Mid Doots, Ahhh Hi, Hum Low... Which made perfect sense to me but was apparently an absolute nightmare for any engineer that took a look at the files once the songs were upwards of 50 layers. What can I say. I'm complicated. *SHRUG EMOJI*


*original 2010 post*
This is a pretty literal translation of the song but I promise the next song, Miserable Lie, is waaaaay far from it's original version. Just you wait...

Track #1: Reel Around the Fountain

The original single-track vocal and post of this song was lost, possibly deleted once I decided to go back and re-record it will multi-layer vocals. At this point, I had no dedicated studio space. I just barricaded myself in the guest room and sat on a couch with a crappy microphone in my hands and tried to sit real still and pretend I didn't have a head cold while singing. I was definitely channeling my inner Zoltan Kodaly music theory teachings combined with my love for traditional choir performed in a big reverby church. I love reverb, like too much. It's a tough one for me to curb, although every engineer has told me to try. I'm getting there!

This project was born out of the sadness of losing two great friends in 5 weeks. At the time, I thought of the music as a major distraction, but now I can hear myself processing all that grief on a subconscious level. Even ten years later, I still get messages from strangers telling me my voice has helped them through hard times. I basically locked myself in a room and sang for 10 hours a day for a year. At times I felt very much alone, but I never was. This is the beautiful thing about sharing pain rather than keeping it locked inside.

My second vocal layered cover. Radiohead's I Will, 2004

I've been a Radiohead fan from the beginning and just adore Thom Yorke.  From his music to his environmental activism, he is incredibly inspiring to me. It is a lifelong goal to work with him someday, so, you know, feel free to let him know.   When Hail to the Thief came out, I loved the whole album but this song really stuck with me.   This was my second a cappella recording and I believe this was recorded in a couple hours from start to finish back in 2004.

I approached it the way all Smiths Project songs eventually happened.  I would start with a vocal based on the root of the chords, sometimes just ahhhs and oooohs to set the pitch for the song. Then I continued to the next layer, adding harmonies in what ever order seemed to make sense.  In general, and this is still true today, I never have any clue what I'll sing ahead of time.  Every layer is an improv built on listening to the previous layers as I sing.  Sometimes a concept would quickly form and I'd take it the harmonies in a particular direction.  Other times, I just kept going until one of the layers suddenly sparked an idea.

Someone once asked me if I had sheet music of all 71 Smiths Project arrangements.  Ooooof.  I wouldn't even know where to begin.

(btw, only a few more days until the first official Smiths Project song is posted!)

My First A Cappella Recording, 2004

The beginning of the Smiths Project was a bit bumpy. Since I thought of it as a personal project that nobody would care about, I had planned on doing a single voice track of each song and post them throughout the year. It was just meant as a way of having me return to the music studio throughout the year and get back into doing something, *anything* with music. I had never envisioned the complicated layered vocal versions that ended up being the project. But after the third single-voice track was posted, someone mentioned it on morrissey-solo.com and suddenly, people were listening and they weren't impressed. Fair enough. I decided, if people were interested, I might as well make the songs more interesting considering I knew I had it in me. I deleted the first few posts and began working on layered versions.

Ever since HS, I had always layered my vocal tracks on my songs but once I went to college, I really got into the idea of layered harmonies, thanks to David Xiques's super early morning ear training exercises using the teachings of Zoltan Kodaly. (Lets just take a minute to bask in the glow of Zoltan. I mean, even his name... wow.) So! I started recording myself singing all parts of these musical exercises. Here is my favorite one.
A post shared by The Smiths Project (@thesmithsproject) on Jan 3, 2020 at 6:34pm PST

I am just your average 34 year old gal with a boyfriend, a beautiful son, a happy (but grumpy-looking) cat, and a piano that looks like a fireplace. I work in San Francisco, where I lived for more than twelve years before moving to San Jose where there are huge tracts of land...

I'm a musician. I started first with piano at age 2, then worked my way through every instrument in marching band by the end of high school. Not that I could play most of those instruments now, mind you. Point is, I was the ultimate band nerd. I even went on to study music at San Francisco State University.

Through out my life, certain music has stuck by me through thick and thin like old friends. The Smiths have been a soundtrack to my life ever since I first heard a third generation cassette copy of Rank as a freshman in high school. I lived in a small desert town of Joshua Tree, CA and there were no radio stations of interest (unless you consider classic rock and country music interesting). The way I was introduced to almost all of my favorite artists was by word of mouth. Any time you heard something cool, you'd pass around cassette tape and make your own copy. I still have cassette copies of Depeche Mode records that someone's big brother used his mom's stereo to copy for me... and I, of course, shared them with others. Ah, pre-internet file sharing. It's my generation's equivalent to old people talking about how they walked to school up-hill both directions, backward, in a blizzard.

When I first heard the Smiths, I was hooked on the melodies, the guitars, the way Morrissey made sense of the jumbled things I was feeling. The lyrics have something that everyone can relate to in one way or another. Johnny Marr is a genius on guitars. I've seen so many guitarists attempt to replicate his guitar parts and they are pretty mind-boggling. I mean, for starters... which guitar part do you even choose to practice?? Each layer upon layer of guitar parts is amazing. Andy Rourke's bass lines rock as well. I love how the bass had its own unique space within the music to create yet another melody line. Out of everyone in the band, poor Mike Joyce on drums is probably the most overlooked. But where would those songs be without the beat? (ok, you're right. The songs would still be amazing.)

These were the songs that I listened to through my formative years. The music that saw me through good times and bad, from sneaking out of the house late at night (eeep, sorry mom and dad), to recuperating from a 2 year bout with a muscle disease, and now singing the songs in the car with my own family. These songs have been in my life for the past 20 years.

I started this blog because I love music. I needed a goal for the new year and I wanted it to be something that involved singing as often as possible. I used to do more layered and intricate recordings back when I had all the time in the world but now that I have more responsibilities, music has taken a back seat for a long, long time. Too long. With a toddler pulling on my shirt constantly, it's all the more important to make a little time for myself to do what I love.

The year is 2010 and it's time to reconnect to my "inner musician." She's kinda dusty.

I thought I would share with you some oldies as we head into The Smiths Project songs. After high school, I was briefly with a band who also loved The Smiths. Here is a song we recorded when I was about 18.

Made of Cinders
Recorded by Cipher in 1994

Lyrics by Chad Murray (sp?) who I never really knew very well, guitars by John Given who is still the best guitar player I've ever worked with, and Nathen Lester with the awesome bass and recording skills. Growing up in the desert of Joshua Tree in the 80s and 90s, there was no internet, just kids who spent time doing things that interested them. It resulted in some incredibly talented kids who are still doing amazing things today. A lot of them who are still doing music as well. Maybe it's time for a reunion? 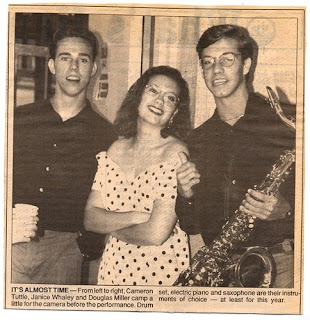 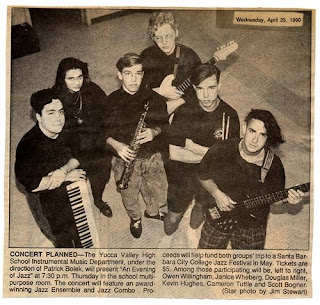 janice.bandcamp.com
"Janice Whaley put her mind to making a 71-track a cappella tribute to The Smiths. After a year of hard, inspired work she not only succeeded, she made a very beautiful, admirable, no, ASTOUNDING a cappella album. Morrissey, et al, you should be proud of her."
-Tony Visconti
Legendary record producer. Most known for producing T. Rex, David Bowie, Morrissey, and Kristeen Young.

____________
"I've never known anyone approach a task with the clear-headed vision and unwavering dedication that Janice has shown on The Smiths Project. Embarked on with love and accomplished with style!"

-Curt Smith
Musician, Co-Founder of
Tears for Fears
____________
"For me, The Smiths Project personifies why we all love music. Janice is the rare artist that might not know how talented she is...well, the cat's out of the bag. Congratulations and don't stop. Ever."

"Many congratulations to you on your ambitious Smiths Project. It is the feat of a true apostle - once it's over you shall officially be anointed Saint Janice of Smithdom." (link)
-Simon Goddard
Music journalist, author of The Smiths- Songs That Saved Your Life and Mozipedia

"As a lifelong smiths fan, I'm blown away by Janice's versions, the arrangements, her voice... I hear the songs in a whole new way."
-Thomas Lennon
Actor, comedian, writer, director and producer. Most notably from MTV's The State and Lt. Dangle on Comedy Central's TV series Reno 911!